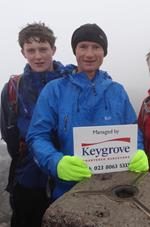 Andrew Archibald says “The lads wanted a challenge after completing their A levels and so we decided to climb the highest peaks in England, Scotland & Wales over the weekend of 27/28 June.  Whilst the weather was glorious in the south of England it was cold wet and windy on the peaks. We started up Ben Nevis at 5.00pm on Saturday 27th June, reached the summit (1,344m) at 7.00pm, drove down to the Lake District and climbed Scafell (964m) from Wasdale Head in the middle of the night reaching the summit at 4.00am on Sunday morning, then drove to Snowdonia and climbed Snowdon (1,085m) via the Pyg track reaching the summit at 11.30am and finishing in the Pen-y-Pass car park soon after 12.30pm.

“This was not for charity, it was just a hard fast walk that we did for fun! There is a lot of driving involved as we covered 1,250 miles over the weekend although only 462 miles are during the challenge itself.  We could not have achieved it without my wife Pippa who did most of the driving.”